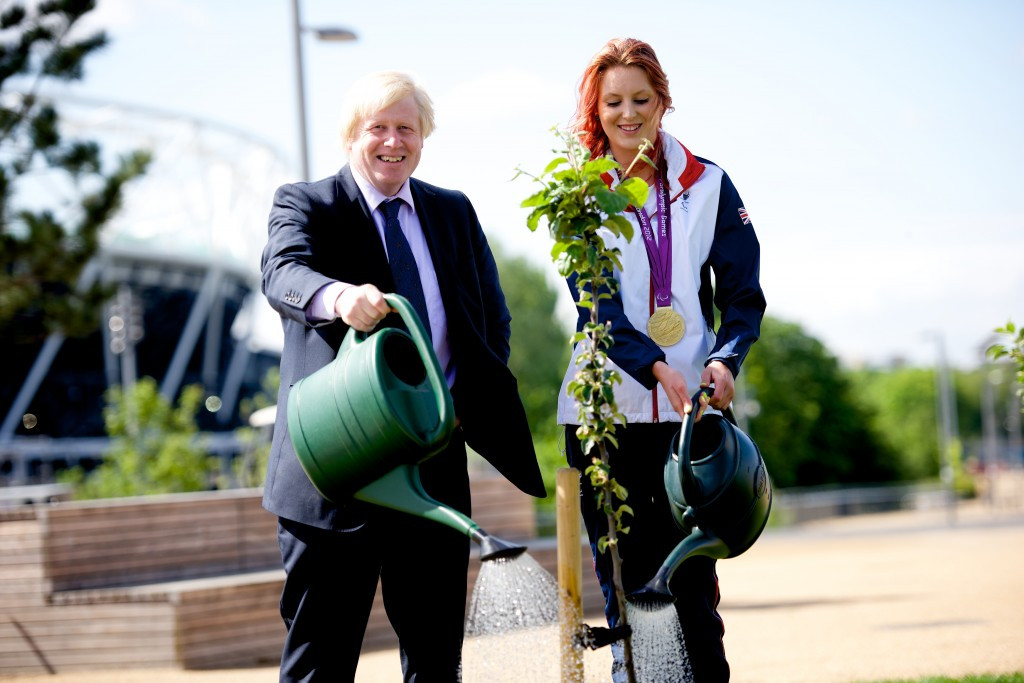 The orchard, known as Mandeville Place, is made up of 55 fruit trees, including one for each of Great Britain's 34 gold medal winners at the London 2012 Paralympic Games.

Johnson was joined by champion swimmer Jessica-Jane Applegate, who has a Norfolk Beefing apple planted in her honour.

The orchard, named after Stoke Mandeville - the birthplace of the Paralympic Movement, has officially opened as part of London Tree Week, running until Sunday (May 31), which was set up by Johnson three years ago to celebrate trees in the capital and to encourage people to care for their local greenery.

The idea was developed by Churchman Landscape Architects and Studio Weave, who worked with local disability groups and have taken inspiration from the use of the apple in the London 2012 Paralympic Games Opening Ceremony.

The orchard is surrounded by a pavilion that incorporates elements from the Paralympic Wall, which was originally located in the Athletes’ Village for people to write their messages of support.

It has been designed in partnership with the Urban Orchard Project to recognise the values and people that made the 2012 Paralympic Games a success.

It will include a unique apple tree chosen especially for the park called 'Paradice Gold', a name chosen through a national schools' competition, and will join 13,400 trees already planted across Queen Elizabeth Olympic Park that has 15 acres of woods, hedgerow and wildlife habitat.

“The trees in this new orchard, which will soon be laden with fruit, encapsulate the spirit of the greatest Paralympic Games ever,” said Johnson.

“I for one can’t wait to savour the first Olympic Park apple and Mandeville Place is a most welcome addition to the thousands of trees and acres of green open space that make up this fantastic park.

“I hope as many people as possible get to enjoy London Tree Week events and celebrate one of the leafiest and greenest cities in Europe.”

London Tree Week is part of Johnson’s wider plans to make Britain's capital a greener city, including delivering 100 pocket parks and planting 20,000 street trees on pavements and along highways to clean the air, and increase green space.

The Mayor leads the RE:LEAF partnership of organisations which has contributed to the planting of more than 100,000 trees across the city.

“I’m so excited to be back at Queen Elizabeth Olympic Park and help open Mandeville Place," added swimmer Applegate.

“It will be a lovely spot to sit and relax during the summer, and to remind us of the incredible Paralympic Games.

There are numerous free events taking place over London Tree Week, including guided tree walks in Greenwich and Richmond Parks, and tree history events at the National Gallery.

A City Hall exhibition will include images of trees around London’s Tube stations which can be found on a free Tree-Routes app.

The Mayor is also encouraging London citizens to get out and explore the capital’s great trees and woodlands and to share photos using Twitter and Instagram #LondonTreeWeek.

The opening of Mandeville Place marks an exciting summer of events on Queen Elizabeth Olympic Park.

One of these is National Paralympic Day, featuring the Mayor of London’s Liberty Festival, which takes place on July 26.