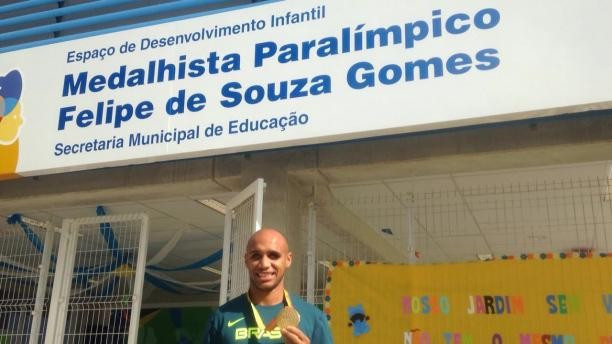 Brazil's Rio 2016 Paralympic athletics champions Felipe Gomes, Daniel Tavares Martins and Ricardo Costa de Oliveira have all had public schools named after them in recognition of their performances at September’s Games.

Tavares Martins set a world record of 47.22 seconds on his way to gold in the men’s 400m T20, while Costa Oliveira won the men’s long jump T11 final.

"It is certainly one of the greatest honours of my life," said Gomes, whose name is now featured in a school in the Tanque neighbourhood, in the west of Rio de Janeiro.

"Now I know I am going to have my name here for years to come because of what I was able to do at the Paralympics."

Tavares Martins, who has his name attached to a school in Ricardo de Albuquerque, in the North of Rio, added: "I am very happy and surprised with this honour.

"Studying is the most important thing you can do for yourself.

"I will be able to tell the students that, regardless of what the barriers may look like, you should never give up on your dream.

"I have just fulfilled mine."

Meanwhile, a school in the Guaratiba area, in the west of Rio, was named after Costa Oliveira.

Brazil won a total of 72 medals at their home Paralympics, which consisted of 14 golds, 29 silvers and 29 bronzes.

This was the country’s best-ever performance at the Games.