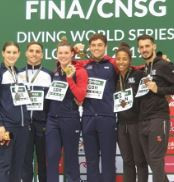 Daley, who won the men’s 10m synchronised platform final with Matthew Lee on Friday, scored a total of 322.89 with Reid to take victory over silver medallists Australia, who managed 322.14, and Canada, who scored 319.02.

China’s Yang Hao beat countryman Junjie Lian and Daley to win the 10m platform men's final with 559.15 points at the London Aquatics Centre that hosted competition at the London 2012 Games.

What a perfect ending to a fabulous event in London - @TomDaley1994! and Grace Reid ?? gave the home crowd a gold medal ? in the Mixed Synchronized 3m Springboard Final! ??? Watch live on ? https://t.co/bEozhdW5qV ?? #Diving #DWS19 pic.twitter.com/dFxSNno3kg

Australia’s Maddison Keeney won the opening event of the night, the women’s 3m springboard, with a total of 368.30 from Canada’s Jennifer Abel, who scored 353.05.