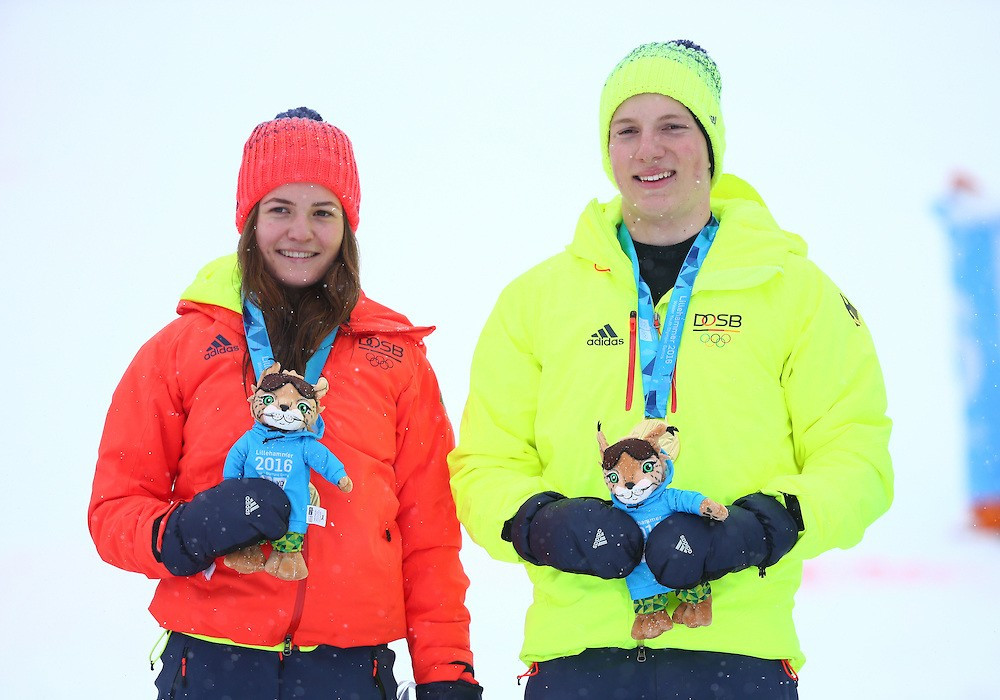 Germany’s Jonas Stockinger capitalised on a mistake from Russia's Alexey Konkov in the last head-to-head race of the parallel mixed team event to secure a gold medal for his country on a thrilling final day of Alpine skiing action at Lillehammer 2016 here today.

Stockinger, along with partner Julia Ripsler, had a 2-1 lead over the Russian duo of Konkov and Anastasiia Silanteva in the gold medal contest and he knew victory would hand his country victory.

After a closely-fought opening section of the race, Konkov skied too closely to one of the gates and could not recover, allowing the German to finish the duel unopposed as Stockinger triumphantly raised his arms in the air, crossing the line in 19.10sec in an event watched by Norwegian Prime Minister Erna Solberg.

“I got an injury in the super-G after a big crash,” Stockinger said.

“I actually [shouldn’t have] raced today, but I had to - it was very, very cool.

One male and one female skier represented each of the 16 teams in the competition, with the men and women each going against each other in two parallel runs down the short course.

The team with the most victories out of the four heats progressed to the next round, with a tie-breaking rule in place if the contests finished all-square.

This was decided by adding the quickest male and quickest female runs together and the team with the fastest combined time was declared the winner.

Ripsler ensured she got her country off to the best possible start, clocking 19.83 in the opening battle with Silanteva, who finished 0.23 seconds adrift.

Russia, however, fought back in the second head-to-head as Konkov powered down the run in 19.07, a time Stockinger was unable to surpass, finishing 0.16 slower.

Germany then seized control, moving to within one victory of the gold medal when Ripsler again proved too strong for her Russian challenger, completing the course in 19.70.

Konkov went in to the fourth and final battle needing to produce an outstanding time to snatch the title away from Germany but his error midway through the race ensured Ripsler and Stockinger topped the podium.

The Finnish pair of Riikka Honkanen and Sampo Kankkunen sealed the bronze medals as they overcame Canada’s Ali Nullmeyer, who earned a silver in the slalom earlier in the week, and her team-mate Justin Alkier 3-1 in the small final.

Both semi-final contests had to be decided by tie-breaks after they each finished locked at 2-2 as Russia and Germany ousted Canada and Finland respectively.

There was to be no fourth title at the second edition of the Winter Youth Olympic Games for American star River Radamus, who has thrust himself firmly into the limelight with a series of superb displays during the event, as he and partner Keely Cashman were knocked out at the first-round stage by Canada.