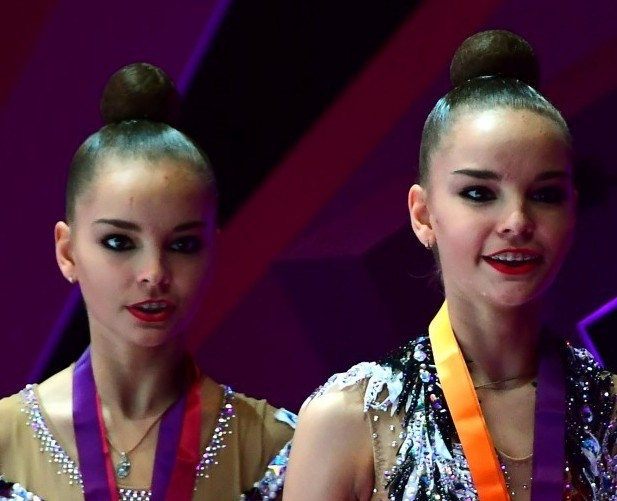 Arina won gold in both the hoop and ball apparatus yesterday as her sibling took both silver medals.

The two split gold medals in the other two apparatus finals today as action concluded at Centennial Hall.

Dina prevailed in the clubs final with an overall score of 19.100 points.

Israel's Linoy Ashram collected the silver on 16.300 points with Arina rounding out the podium in third after she also posted a 16.300 but had a slightly lower execution score.

Arina swiftly returned to the top of the podium in the ribbon category.

China won the open event group final with a score of 22.683 points.

Romania finished 0.378 points behind in silver medal position and Hungary completed the top three after posting a score of 22.244.

The Japanese team of Riri Kitazume, Takumi Kanai and Mizuki Saito won the open event trio title with a score of 22.636 points.

They narrowly beat their Chinese rivals, second on 22.425 points, and France, who occupied third place on 20.850.

Russia clinched the last aerobic gymnastics medal as the seven-strong team posted a score of 18.600 points to seal gold in the open event step final.

Fabriana Arias of Colombia finished inches behind in 44.240 and Giulia Bongiorno sealed a second medal in the event for Italy as she took the bronze in 44.274.

Jhoan Guzman of Venezuela took silver in 41.785 and third place, in a time of 41.905, went to Chilean Lucas Silva Santibanez.

Arias recovered from the disappointment of finishing second earlier in the day by taking gold in the women's 10,000m points elimination race.

Her overall time of 16min 22.398sec saw her finish over two seconds clear of her nearest rival.

Livio Wenger of Switzerland finished in second in 15:02.696 and Mexico's Milke Alejandro Paez completed the top three in 15:03.140.

Action also concluded in life saving today where the final eight champions were crowned at the Orbita Indoor Swimming Pool.

She was only able to claim the silver medal in the 4x25m relay event with her compatriots, however, as Belgium took gold in a World Games record of 1:19.69.

Justine Weyders of France wo the women's 100m manikin tow with fins final in 57.18, a Games record.

In the sole air sports final today, Hungary's Ference Toth claimed the glider acrobatics title with a score of 3,404 points at Airport Szymanow.