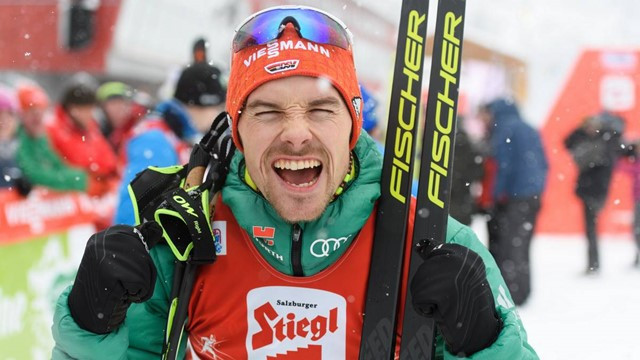 The German crossed the finish line 12.2 seconds in front of Finnish runner-up Eero Hirvonen, who was also earning a podium finish for the second time this week in the large hill/10 kilometres men's Gundersen competition.

However, Akito Watabe was able to extend his lead in the World Cup standings to 202 points by finishing third, 22.1 seconds behind Rießle, with three more competitions remaining this season, one of them coming at the same venue tomorrow.

The ski jumping round produced a surprise.

Rießle, a member of Germany's gold-medal winning team and the silver medallist in the individual large hill/10km at the Pyeongchang Winter Olympics, has been known primarily as a very fast cross-country skier.

But he underlined his growing ambitions, which now include second place in the World Cup standings, by winning the jump, producing a best of 139.5 metres that gave him 143 points and a 21 seconds head start on Watabe in the second element.

The Japanese athlete - silver medallist behind Germany's Eric Frenzel on the normal hill in Pyeongchang last month - had delivered a jump of 137m from one gate lower than Rießle and accumulated 137.7 points.

Hirvonen jumped to a top position as well with 142.5m, the longest jump of the day, starting his race 25 seconds after Rießle.

Germany's two Olympic individual champions, Johannes Rydzek and Frenzel, were among ten athletes starting within a minute of Rießle.

But the leader was never in danger of being caught by the pursuers and enjoyed the frenetic cheers of the large and boisterous crowd before finishing in 24:06.6.

Rydzek fell on the last lap but got up to finish sixth after Watabe had held off Frenzel.

Norway’s Jan Schmid was seventh to remain second in the overall standings on 1,033 points, behind Watabe's 1,235.

Klingenthal will host another men's Gundersen tomorrow before the World Cup tour reaches its finale next weekend with two competitions in the German resort of Schonach.

Watabe can now only be overhauled at the top at the final race of the season and could win the title tomorrow.