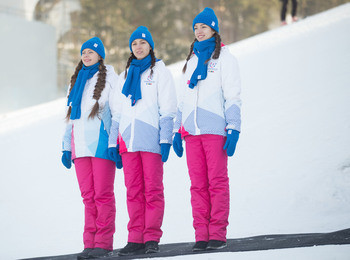 Krasnoyarsk 2019 has released a clothing line complete with the slogans and logos of the Winter Universiade in Russia next year.

Vests, jackets, hats, scarves and headbands have all gone on sale sporting the colours, logos and slogans of Krasnoyarsk 2019.

White, blue and pink are the colours of Krasnoyarsk 2019, but items of clothing will also feature the logo of the International University Sports Federation (FISU).

Most items will also feature the Krasnoyarsk 2019 slogan "Real Winter".

The clothing line is manufactured by FORWARD, who were awarded the contract after being the official supplier of sportswear for the Russian national Universiade teams since 2003.

As part of the partnership, FORWARD will also supply uniforms for Torchbearers, judges, facility employees, volunteers and organisers.

As the first set of pieces go on sale, the company have already planned an expansion to the range.

Gloves, mittens, sweatshirts, polo shirts and tee-shirts with short and long sleeves are expected to be released in the near future.

The official Krasnoyarsk 2019 clothing can be found in stores across Russia as well as online.

The Universiade is due to begin on March 2 next year and run till March 12.