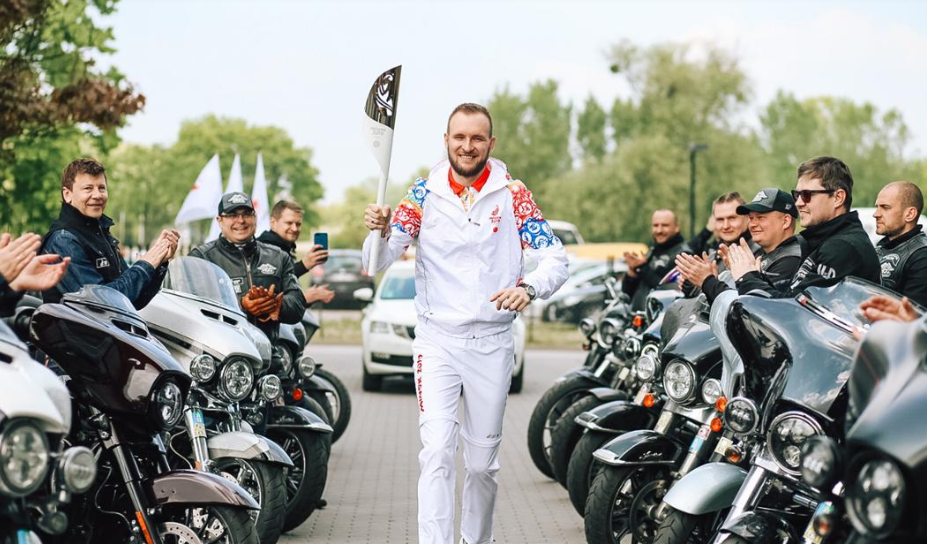 The 2019 European Games Flame is set to cross the border into Belarus after a hectic eight days in which it had been carried by the oldest surviving Olympic champion and reached the highest point in Western Europe.

The Relay was given a flying start when the Torch burned at the top of Mont Blanc after an ascent by members of Belarus Mountain Federation.

Carrying the Flame in the Slovenian capital Ljubljana proved a bittersweet moment for gymnast Saso Bertoncelj, who won pommel gold at the inaugural Games in Baku four years ago.

"Unfortunately, I had a series of injuries and was unable to qualify," he said.

"I am not getting any younger but for the time being, I’m hoping to take part in the third European Games."

"I will support both countries in the Games," said Skrabec.

Rain did not dampen enthusiasm in Vienna, where Minsk-born violinist Yulia Lebedenko was among the Torchbearers.

"If anyone had doubts about visiting Belarus, these doubts will surely disappear," she said.

As they have done throughout, the bikers of The One Chapter Belarus made an impressive spectacle as they escorted the Flame along the banks of the Danube.

"I was especially surprised by these strong guys on bikes who have already covered thousands of kilometres," said Christoph Sieber, Olympic windsurfing champion at Sydney 2000 and Chef de Mission of the Austrian team in Minsk.

Karate will again be part of the European Games.

Another Torchbearer, rhythmic gymnast Nicole Ruprecht said: "The line-up in Minsk will be every bit as tough as the Olympics."

Other bearers included karate's Bettina Plank, who won silver in under 50kg kumite in Baku.

In Budapest, 124 runners carried the Flame to mark the establishment of the Hungarian Olympic Committee 124 years ago.

Although Budapest has never staged the Olympics, the Flame passed through in 1936 and 1972.

At 98, she is the oldest living Olympic champion and won five Olympic gold medals, four of them at the age of 35 in the 1956 Melbourne Games.

But for the Second World War, her record would have been even more impressive and she remains symbol of Hungarian sporting excellence.

A dozen other Olympians and Paralympians joined an 11km relay which began in Hosok Tere.

Canoeist medallst Katalin Kovacs, who had won Olympic gold at consecutive Games, and legendary swimmer Tamas Darnyi, who dominated the individual medley at Seoul 1988 and Barcelona 1992, both carried the Flame.

Ferencvaros and Belarus striker Nikolai Signevich said: "I was not aware of the significance of this until I told my wife and relatives.

"Over time, I realised how important this was for our country."

She is expecting her second child and does not know if she will defend her European Games title in Minsk.

"It depends on what the doctor tells me.

"I'm not taking any chances."

The 2008 canoeing silver medallist Erik Vlcek joined her and others included boxers David Michalek and Tomas Zold, both set to compete in Minsk, and Anna Shivaba, a language teacher at Univerzita Konstantina Filosozofa in Nitra.

"It is a great opportunity to tell people about Belarus, not just about sport but about our history," she said.

In the Czech Republic, the Flame was taken to Brno where the Czech Olympic Committee had organised a sports day for young people which featured archery and judo.

"We were trying to find an unusual way to organise this ceremony and decided on this sports school," said Belarus ambassador Valery Kurdyukov.

Poland was the final nation to be visited before the Flame reached Belarus soil.

The Flame they left there will be the star attraction at a Polish "Olimpijski Piknik", an annual sports festival due to take place on May 25.

Visitors will also have the chance to try out Olympic sports.