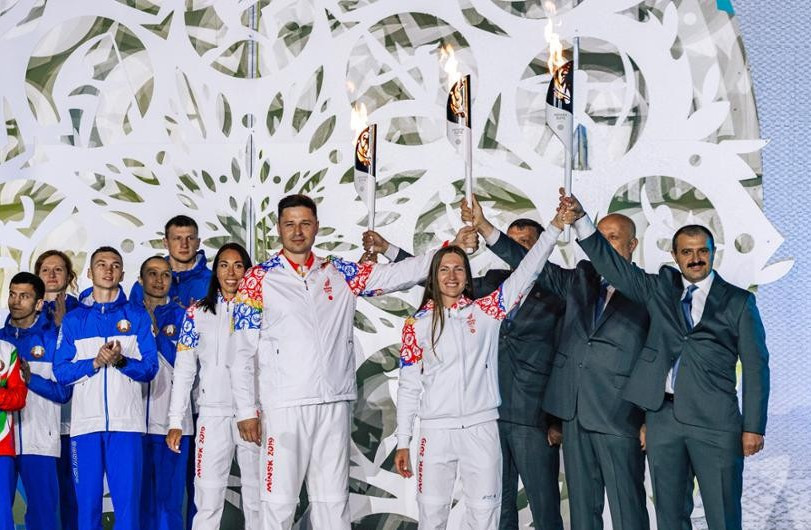 Poor health had forced her to pull out of the lighting ceremony in Rome last month but the 32-year-old joined 2008 canoeing gold medallist Aleksandr Bogdanovich and 2015 world 800 metres champion Marina Arzamasova as the Flame arrived at State Flag Square.

The special celebration was shown live on Belarusian state television.

The Flame burned in a cauldron designed to invoke the emblem of the Games.

There was also an echo of the last time such a Flame had visited Minsk.

Three-times Olympic wrestling champion Aleksandr Medved lit the cauldron just as he had done in 1980 when Minsk was a venue for the Moscow 1980 Olympic football tournament.

The Torch was then passed to athletes representing the younger generation.

At Minsk 2019, the medals in sambo will be among the first decided.

"It is a great honour and joy to welcome athletes and fans from all over Europe to the Belarusian capital," said Minsk Mayor Anatoly Sivak.

Sivak was joined at the cauldron by Tourism Minister Sergey Kovalchuk, who had also been present when the Flame was lit in Rome.

A space traveller and rock stars joined Belarusian Olympic champions as the Torch continued its journey in glorious sunshine.

It fell to Nadezha Skardino, who won 4x6km relay gold at the Pyeongchang Winter Olympics, to begin proceedings at the National Library of Belarus.

She did so a few hours after Domracheva carried the Flame when it arrived in Minsk.

The biathlon theme was maintained by Alexander Tikhonov, who won his four relay gold medals in the Soviet era.

Cosmonaut Oleg Novitsky, a veteran of missions on the International Space Station, was also a Torchbearer as the Flame made its way up Nezavisimosti Avenue.

The choice of Minsk-born 2018 aerials champion Anna Guskova, and Alla Tsuper, her predecessor as Olympic champion, reflected another sport in which Belarus had struck gold in recent Games.

Tsuper had won hers at her fifth Winter Olympics.

“I am very happy that I could carry the Flame and run in the Relay,” Clegg told Belarusian television.

“Minsk has become my favourite city.”

A feature of this Relay so far has been the choice of popular singers to carry the Flame.

Alexei Khlestov and Inna Afanasyeva had a hit with a track entitled “Hold Me”, appropriate for the pair chosen to hold the Torch.

It was carried into October Square by Vitali Artist, lead singer of indie band beZ bileta.

He was greeted by Spyros Capralos, chairman of the European Olympic Committees Coordination Commission and Dmitri Petrusha, head of the Minsk central district administration.

“It is a great honour to welcome the symbol of the Games,” Petrusha said.

“This Flame is capable of warming the hearts of millions.

“The Games are a milestone event for every citizen of our country and all those who do sport and lead a healthy lifestyle.”

Later in the week, the Flame will call at the Minsk tractor plant and the automobile factory.

The programme also includes the Central Botanical Gardens, the War Museum and a journey on the metro to the Petrovshchina station.

It will also form part of a welcome ceremony in the Athletes' Village on the eve of the Opening Ceremony.