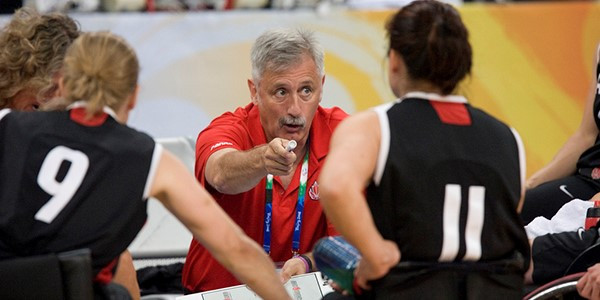 Paralympic wheelchair basketball coach Tim Frick has been appointed to the Order of Canada.

The Order of Canada recognises outstanding achievement, dedication to the community and service to the nation by individuals from all sectors of Canadian society.

Wheelchair Basketball Canada has congratulated Frick and paid tribute to a man it has described as "one of the most decorated coaches and remarkable individuals in Canadian sport".

"Tim is a true innovator, builder and advocate who has shaped the game of wheelchair basketball for more than three decades," said Wheelchair Basketball Canada executive director Wendy Gittens.

"He is tirelessly committed to sharing his passion and knowledge for the game, and he has singlehandedly inspired a generation of athletes and coaches to pursue their potential on and off the court.

"Tim is most deserving of this honour and we join the Canadian sport community in saluting him on his appointment to the Order of Canada."

Being appointed to the Order of Canada is the latest honour given to Frick, the first Paralympic coach to be inducted into Canada’s Sports Hall of Fame.

Frick was last month honoured by the Coaching Association of Canada for his work in wheelchair basketball.

The awards recognise individuals who have gone above and beyond to inspire and develop NCCP coaches in their community.