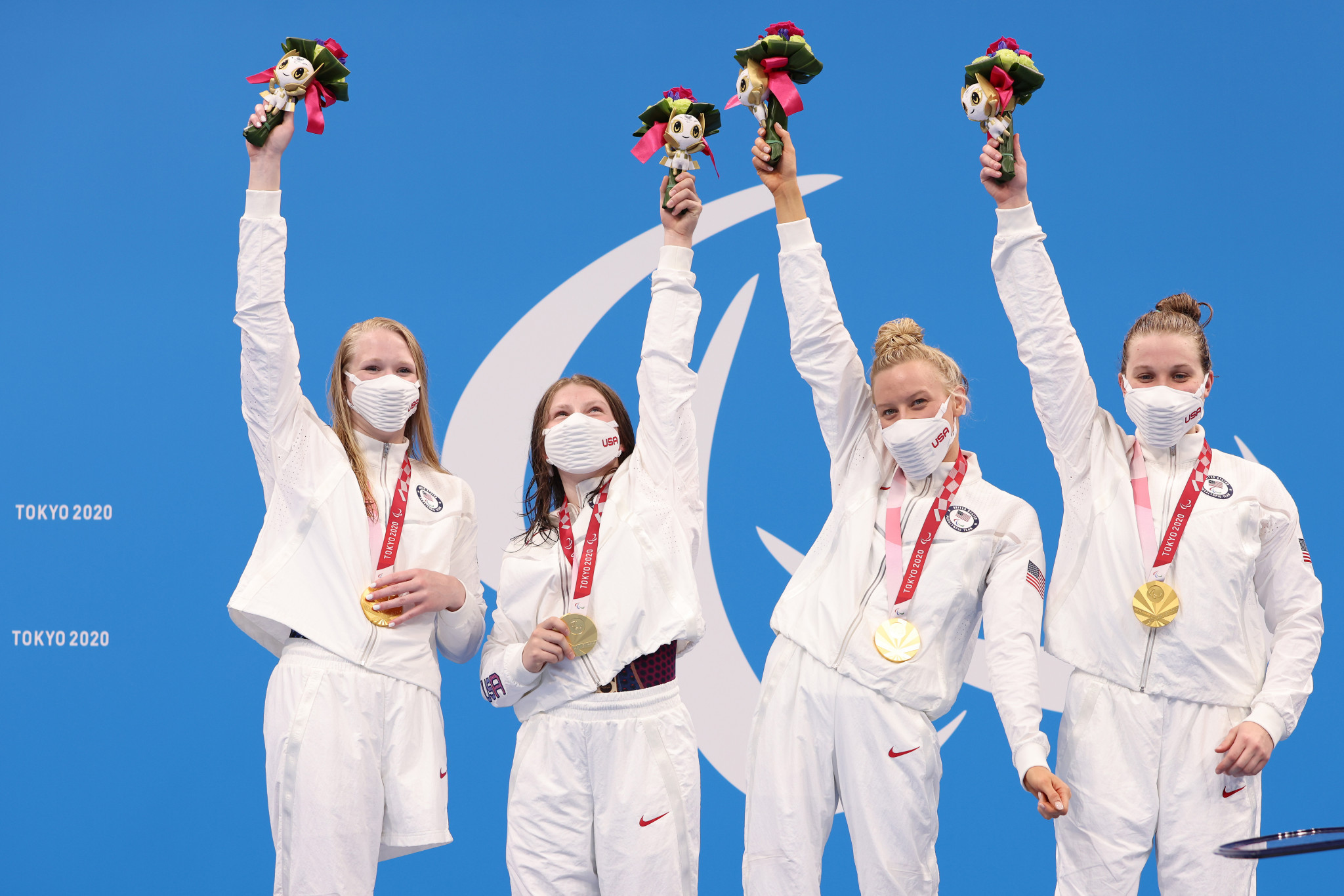 The United States' Morgan Stickney pulled off a fantastic last leg in the 4x100 metres women's medley relay - 34 points race to win gold to round off the evening of swimming at the Tokyo 2020 Paralympic Games at the Aquatics Centre.

Chasing down the Russian Paralympic Committee (RPC) and Australia, Stickney touched the wall first on the anchor leg and stood top of the podium alongside team mates Hannah Aspden, Mikaela Jenkins and Jessica Long in a time of 4min 52.40sec.

A fantastic last 25 metres in the women's S9 100m butterfly saw Zsofia Konkoly of Hungary win the gold medal as New Zealand's Sophie Pascoe blew up in the final strokes.

Looking a dead cert for the gold, the Kiwi struggled in the last 25m as Konkoly overtook her for a Paralympic record of 1:06:55.

Elizabeth Smith of the US came through for second while Spain's Sarai Gascon came from nowhere, narrowly beating Britain's Toni Shaw for bronze.

Another gold was won by Hungary in quick succession as Bianka Pap finished first in the women's S10 100m backstroke in 1:06.70.

It follows her London 2012 victory representing Ireland and her win for Britain at Rio 2016.

Jiang Yuyan of China smashed the world record by over eight seconds in the women's S6 400m freestyle in a time of 5:04.57.

Yelyzaveta Mereshko of Ukraine was also inside the old world record too for silver and Switzerland's Nora Meister took bronze.

Simone Barlaam of Italy came through for the silver medal under 60 seconds too, and the RPC's Alexander Skaliukh claimed bronze.

Talisson Henrique Glock of Brazil won the opening race of the day for the gold medal in the men's S6 400m in a time of 4:54.42, holding off the charging Italian Antonio Fantin.

Viacheslav Lenskii of the RPC was 10 seconds back to win the bronze medal.

Yip Pin Xiu of Singapore took the gold medal in the women's S2 50m backstroke in a time of 1:02.04, far in front of the rest of the field.

She defended her Rio 2016 title alongside her 100m title and secured her third gold in the 50m backstroke.

Maksym Krypak of Ukraine snatched the world record in the men's S10 100m backstroke for the Paralympic title in a time of 57.19 shaving off five hundredths of a second from his previous best and finishing more than two seconds ahead of his closest competitor.

The charismatic Gabriel Geraldo dos Santos Araujo of Brazil bagged another Paralympic gold medal with a victory in the men's S2 50m backstroke in a time of 53.96.

It was his second gold of the Games, in addition to a silver won in the pool.

Chile's Alberto Abarza won the silver medal nearly four seconds back and Vladimir Danilenko of the RPC was the bronze medallist.

Zou Liankang of China was the silver medallist and Denys Ostapchenko of Ukraine claimed bronze.

Australia's Rachael Watson was victorious in the women's S4 50m freestyle from lane two to break the Paralympic record in 39.36.

Arjola Trimi of Italy broke the S3 world record in 40.32 and finishes with silver; while Marta Fernandez Infante of Spain was the bronze medallist.

Viacheslav Emeliantsev of the RPC and Reece Dunn of Britain won the silver and bronze medals respectively.