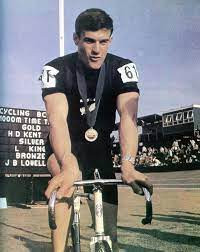 Harry Kent, the first New Zealander to win a cycling gold medal at the Commonwealth Games, has died at the age of 74.

Kent was not considered a serious medal contender for Edinburgh 1970 and had to pay some of his travel expenses himself.

But he stormed to victory in the one-kilometre time trial, beating Trinidad and Tobago’s Leslie King.

Kent also played a part in New Zealand’s only other gold medal at those Games when he helped Bruce Biddle win the road race.

His victory in the velodrome was even more remarkable because the board track was steeper and faster than anything he had experienced in New Zealand, where he raced on concrete surfaces and flatter asphalt.

"It was so steep I was almost s...ting myself the first few times I ventured on it," Kent later recalled.

"It took three or four days for me to just get confident on it."

Having posted a personal best by more than two seconds, he had to wait to see whether the remaining competitors rode a better time, which none did.

Kent was named New Zealand Sportsman of the Year in 1970 and awarded the Lonsdale Cup by the New Zealand Olympic and Commonwealth Games Association for being its outstanding athlete.

Kent competed at Munich 1972, finishing 16th in a race won by Fredborg.

But an incident during those Olympic Games so alarmed Kent that it traumatised him for the rest of his life.

Munich 1972 was overshadowed by the actions of a Palestinian guerrilla group that invaded the Olympic Village and killed one Israeli athlete and held 10 others hostage.

The New Zealand team was housed next to the Israelis, and Kent’s eldest daughter Heidi Oliver said he was left shocked after a Palestinian gunman mistakenly burst into his room.

"It scared the life out of him," she said.

"He didn’t want to be away after that."

Kent was of Waitaha descent, an early Māori iwi which inhabited the South Island of New Zealand, and his family lived in Upper Hutt from the time his grandfather settled there.

After retiring from cycling, Kent returned to his hometown and managed his family's garden nursery.

He ran a fruit and vegetable market, named Trentham Village Market, and acquired the nickname of the "Flying Florist".

Kent was elected to the City Council and served for nine years during the 1970s and 1980s.

He continued cycling for the rest of his life.

He was one of the two guests of honour when the Wellington Velodrome was reopened in December 2003, together with Sarah Ulmer, the first New Zealander to win an Olympic cycling gold medal when she won in the 3km individual pursuit at Athens 2004.