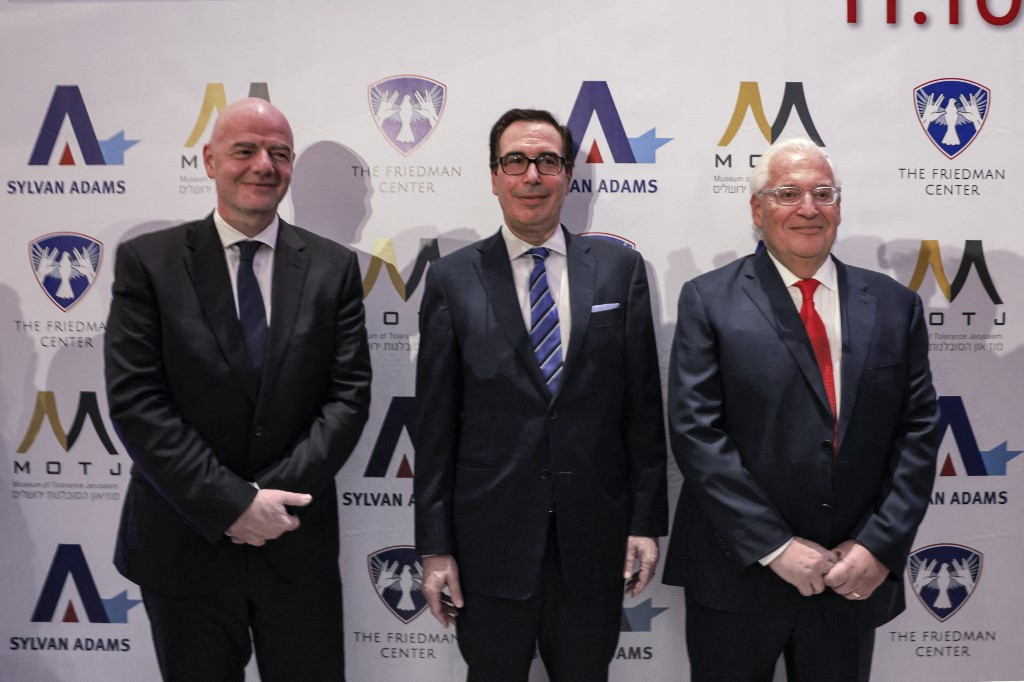 A planned visit by FIFA President Gianni Infantino to Palestine has been cancelled at the last minute, after a trip to Israel during which he appeared at two events organised by a official linked to former United States President Donald Trump.

Infantino, making his first official visit to Israel, appeared at the opening of The Friedman Center for Peace through Strength at the Museum of Tolerance in Jerusalem set up by the former Trump-administration Ambassador to Israel David Friedman.

Infantino’s participation in the event angered the Palestinians, who cancelled a meeting between him and the President of the Palestinian Football Association (PFA), Jibril Rajoub, in Ramallah.

The Palestinians were angry both over the association with a Trump official whose policies they claim led to the Palestinians severing ties with the US, and the location at the Museum of Tolerance in Jerusalem.

The Palestinian Authority Foreign Ministry criticised the event, alleging that Friedman is "notorious for his extremist positions and support for annexation, colonisation and other crimes under international law in addition to his notorious efforts at denying the inalienable rights of the Palestinian people".

The Palestinian Authority noted that the Museum of Tolerance was built on the site of Muslim graves.

"One of the basic requirements for peace is respect of religious sites, maintaining their status quo, and their status, and in the particular case of the Mamilla cemetery, to allow for its restoration rather than to continue the process of desecration," it said in a statement.

The Palestinians, who had only been contacted by FIFA to arrange a visit for Infantino last Thursday (October 7), were arranging a series of meetings and events that would have included laying the foundation stone for the PFA Technical Centre.

They claimed that they understood Infantino was visiting football leaders in both countries and that it was a set of meetings that would discuss the issues that have hindered the development of football in Palestine, and find possible solutions to pending problems, not least the free movement of football players and equipment across borders.

When they discovered that Infantino, a member of the International Olympic Committee, had in fact attended the glitzy event alongside several high-ranking Trump administration officials, including former Secretary of State Mike Pompeo and former Treasury Secretary Steve Mnuchin, they cancelled his visit.

This evening, Infantino was accompanied by Friedman and Mnuchin to watch Israel's under-21 team play Latvia in Petah Tikva.

"The Palestine Football Association regrets the decision of FIFA President, Mr. Gianni Infantino, to take part in two events that take place at the so-called ‘Museum of Tolerance’, an edifice built over the Ma’manullah Islamic cemetery - the oldest Muslim cemetery in Jerusalem dating back to the 11th century - which we view as a total affrontment to the values of religious tolerance and peaceful coexistence, both endorsed by the FIFA statutes," they said in a statement.

Rajoub had earlier written an urgent letter to Infantino, the PFA statement revealed, urging him not to take part in events since that would convey a message that is contradictory with "his public messages regarding FIFA’s commitment to human rights and the values of peaceful co-existence".

At the end of a long day, enjoying the Israel-Latvia under 21 match with Secretary Steven Mnuchin and FIFA President Gianni Infantino pic.twitter.com/T6dULqM84q

In his letter, Rajoub warned Infantino that "this participation will be seen by many FIFA members as a politicisation of football, something which the FIFA President so adamantly opposed" and claimed, "that the FIFA President’s participation will be seen as a desecration of the Holy Site and will not contribute to bringing people together, but rather pull them apart".

The PFA statement added that, "by deciding to ignore our concerns, and since we do not have the right to interfere in the agenda of a FIFA President, our only remaining alternative was to send our regrets for being unable to receive the FIFA delegation under such circumstances".

During the visit to Israel, when he also appeared at the 10th Annual Jerusalem Post Conference, Infantino had claimed that the signing of the Abraham Accords, the US-brokered normalisation deals Israel signed last year with the United Arab Emirates, Bahrain, Sudan and Morocco, could eventually lead to Israel co-hosting the FIFA World Cup with its Arab neighbours.

Infantino had made sure to include Palestine among the countries that Israel could co-host the World Cup with.

"Why can’t we dream of the World Cup in Israel and its neighbours?" he asked.

"With the Abraham Accords, why should we not do it here in Israel with her neighbours in the Middle East and the Palestinians?