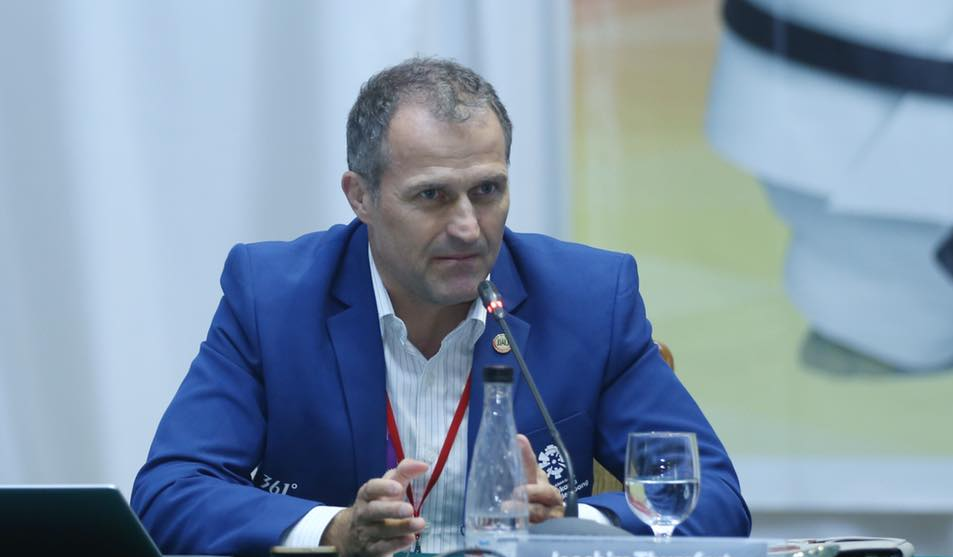 Director general of the Ju-Jitsu International Federation (JJIF) Joachim Thumfart has said there are many challenges to get the sport on the Olympic programme, but recent developments in the sporting community could play to its advantage.

Speaking to insidethegames, he stated that the International Olympic Committee (IOC) has become more open to new sports at the Olympics, noting that there was still an opportunity to feature at the Los Angeles 2028 or Brisbane 2032 Olympic Games despite the work still needed to be done.

First of these is to be recognised by the IOC, with the JJIF only having membership within the Global Association of International Sports Federations at present.

"We are not yet recognised by the IOC as a Federation so this is the first step," said Thumfart to insidethegames.

"We are standing at the moment in front of the door trying to knock to get in and get the recognition.

"We are very confident that we are ready, that we have everything together."

Already, ju-jitsu is a part of the World Games and Asian Games, and has been recognised by the International University Sports Federation for two years.

However, challenges are present with the sports programme for LA28 scheduled to be completed halfway through 2023, just over a year away.

"In general, we would be surprised if they speak against recognising the JJIF, but the problem now is the timeline," added Thumfart.

"We are working on the Olympic dream like everybody else.

"I see the big challenges is that ju-jitsu is huge in the United States, but not united.

"You have all the companies running events, all the different so-called Federations and commercial entities, and our struggle is that in the community not everyone realises that we are a Federation.

"To get the US community, we would need a complete change of mindset in the athletes.

"We would have to get them to understand that they are one team and nation.

"Personally I'm a little afraid that we are maybe a bit late.

"2028 in Olympic terms is coming very fast, but other sports are rattled, so I think the IOC are more flexible now, in the last eight years.

"They've become more flexible to new sports, so we still see a chance."

Established sports such as modern pentathlon, boxing and weightlifting have all been snubbed from the initial programme for 2028, blamed partly on their respective scandals.

The International Modern Pentathlon Union caused a stir within its community by deciding to remove equestrian as a discipline without sufficient consultation and boxing continues to work on its governance issues following the refereeing scandal.

Weightlifting's reputation is also recovering following the lengthy reign of Tamás Aján, who allegedly covered up several doping cases within the sport.

Other sports such as fencing and shooting have been heavily funded by Russian oligarchs, with the financial security of these governing bodies in future also unknown following sanctions in light of the nation's invasion of Ukraine.

With the Abu Dhabi Jiu-Jitsu Pro (AJP) Tour collaborating with the JJIF, there is further ambitions to unite jiu-jitsu under one banner, which the director general thinks provides room for potential.

"We collaborate with the AJP, but as of now you do not see JJIF advert boards in the sports halls, so we are not there yet," he added.

"I think in today's sport world you should be with a professional partner.

"I think this is the right thing for the athletes, for coaches to be professionals and to develop.

"On the other hand it is a positive influence to install the Olympic values into the professional sport.

"AJP can help the get the community together.

"In some countries it's not the athletes, it's the Federation which is not getting people in or there is no collaboration."

Thumfart called the Birmingham 2022 World Games and Hangzhou 2022 Asian Games "critical" events for the JJIF to show its diversity, citing that approximately 40 nations are to compete in the sport at the former.

He noted that if LA28 was not possible, Brisbane 2032 is also in the organisation's sights for Olympic inclusion.

"We are aware of Brisbane, we have an eye on it and we will try in collaboration with AJP to run events there and be visible," he added.

"We now have a solid Federation which is linked to JJIF and we have an Australian world champion from the last World Championship."

Ju-jitsu faces difficult opposition for Olympic inclusion, with the martial arts of judo, taekwondo and wrestling all on the 2028 Olympic sports programme, while boxing and karate are established at the Games too.

Martial arts bodies were formally recognised in July 2021 at the IOC Session.