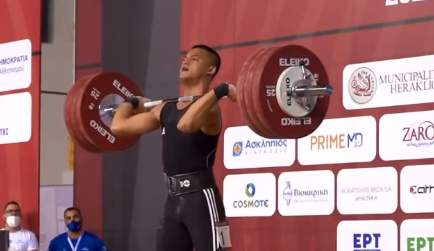 Rizki Juniansyah bettered one of his own world records on the way to winning Indonesia's second gold medal at the International Weightlifting Federation (IWF) Junior World Championships in Heraklion in Crete.

On the fourth day of competition Juniansyah, who will be 19 next month, even attempted to break one of Shi Zhiyong’s senior world records at 73 kilograms.

He failed with that final attempt at 199kg in the clean and jerk, but still gave arguably the best performance of the week.

The other two men on the podium, Alexey Churkin from Kazakhstan and Ryan Grimsland of the United States, also put in phenomenal performances.

Juniansyah bettered his junior world record in the snatch with 156kg on his second attempt, declined his third lift, and came out to secure the title with 185kg in his first clean and jerk.

He then failed at 195kg as he attempted to better his other two junior world records, and went up to 199kg to try and surpass Shi's senior clean and jerk world record.

He failed, but he recently posted a video showing he can lift 200kg so it could happen in the future.

Churkin, an 18-year-old who did not have a single result on the IWF database before today, got within 12kg of Juniansyah’s winning total.

He made five from six for a hugely impressive 146-183-329, which is 15kg more than the winning total of Kazakhstan’s senior national champion at 73kg, Edige Emberdy.

In third place Grimsland put 7kg on his career-best snatch and total in this, his first international appearance as a 73kg lifter.

Colombia had its first winner of the week in the women’s 64kg, where Julieth Rodriguez earned a third victory against her Mexican rival Queysi Rojas.

Rodriguez had beaten Rojas into second place in the Pan American Youth Championships in 2019 and she did it again as the athletes finished first and second in the first Junior Pan American Games in Cali in Colombia last November.

Julieth Rodriguez from Colombia beat them all! We just watched the Women 64kg in Greece during the 2022 IWF Junior World Championships and enjoyed the category a lot. Check her lifts on the next video: Snatch->97kg / C&J ->124kg pic.twitter.com/Ru3jHhXT1T

Today Rodriguez, whose screams after her lifts made her arguably the liveliest and noisiest competitor so far in Crete, proved too strong again.

The totals were exactly the same as in Cali, where Rodriguez was one of seven Colombian gold medallists, 221kg to 215kg.

But this time Rodriguez was lower in the snatch, missing her final attempt, and higher in the clean and jerk, where her 124kg bettered Ecuadorian Angie Palacios’ Pan American junior record.

Rojas finished on 96-119 and both athletes made five of their six lifts.

The German Antonia Ackermann was third in the snatch but dropped away as Marie Mantaropoulos of France took the bronze medal on total, making all three clean and jerks to finish with a career-best 90-114-204.

That was an improvement of 11kg and five places on her effort at last year's IWF Junior World Championships.