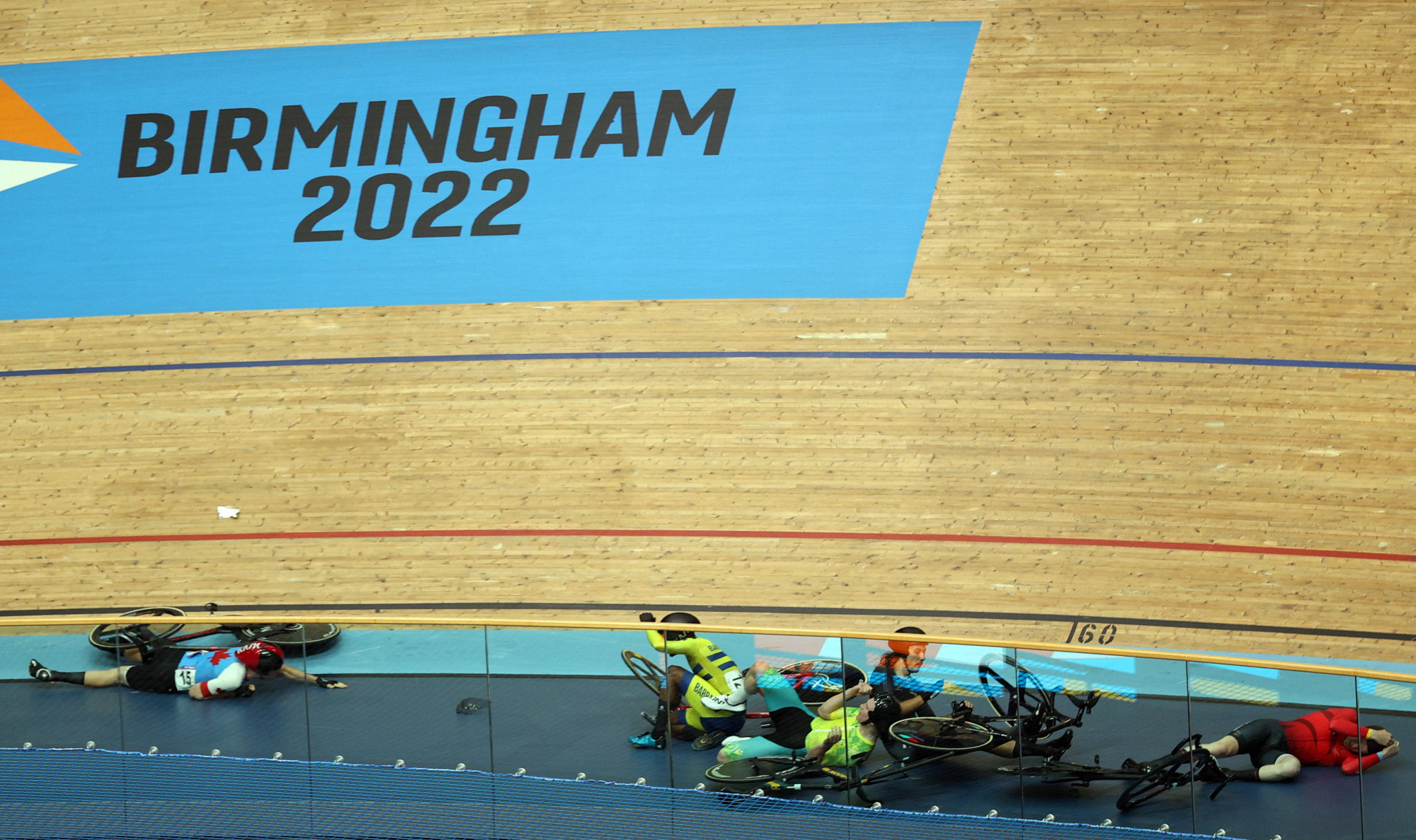 A seven-person crash in which England's Matt Walls was propelled into the crowd, led to three riders being hospitalised, two spectators receiving medical attention and the day's first track cycling session at the Commonwealth Games ended early.

Going into the final lap in heat two of men's scratch qualifying at Birmingham 2022 - with 13 athletes vying for 10 spots to qualify for the final - a collision led to more than half the field coming off their bikes.

Walls was pushed up to the top of the embankment, going over the barrier and landing in a front row of spectators, among them several children.

Images of the aftermath show distressed children, with one injured spectator taken away in a wheelchair, according to the BBC.

It has since been confirmed by organisers that two members of the public were injured, but did not require hospital treatment.

All three riders who were hospitalised have been deemed in decent conditions, with Cycling England confirming Walls had been discharged.

"Following medical treatment in hospital, Matt Walls has been discharged with stitches in his forehead, scrapes and bruises but thankfully no major injuries," read the statement.

"We send our best wishes to all other riders and spectators involved in the crash and thank the medical teams for their expert care."

In a statement organisers said: "Following a crash at the morning session of track and Para track cycling at the Lee Valley VeloPark, three cyclists and two spectators have been treated by the onsite medical team.

"The three cyclists have been taken to hospital.

"The two spectators did not require hospital treatment.

"The next session is due to start at 3pm as scheduled, however an update will be provided as soon as possible if that situation changes.

"We would like to send our best wishes to the cyclists and spectators involved in this incident and to thank the medical team for their swift action."

Several members of the public were seen to by staff due to being in emotional distress.

Walls was attended to by medics, propped up against a wall, with an oxygen mask on.

Others caught up in the crash include Isle of Man cyclist Matt Bostock, who was carried away on a stretcher and has been taken to hospital.

Bostock is doing well according to his coach, as reported by Manx Radio.

Canada's Mathias Guillemette, leading from the front, appeared to move from his line, causing a domino effect which led to Bostock and Barbados' Jamol Eastmond colliding, causing more to fall behind.

Guillemette's team-mate Derek Gee went down too and was unable to finish.

As a result, only nine qualified for the final.

Others who went down - but later got up and qualified - included Josh Duffy of Australia.

Gordon and Jackson were unsaddled in the crash before getting up.

The Scottish rider appeared to be in a sling and missed the final which was won by Corbin Strong of New Zealand.

The second session at the Lee Valley VeloPark began at the scheduled time despite the incident.

Isle of Man's team confirmed that Bostock had a scan after being taken to hospital.

They also thanked the staff at the track for their urgent response.

"A CT scan was undertaken, and the initial prognosis is positive.

"Matt is now being further assessed by a specialist to confirm that he has suffered no serious injuries.

"Team Isle of Man wishes to extend its best wishes to the other cyclists involved in the incident, in particular Matt Walls, and to the spectators who were injured and affected by the crash."