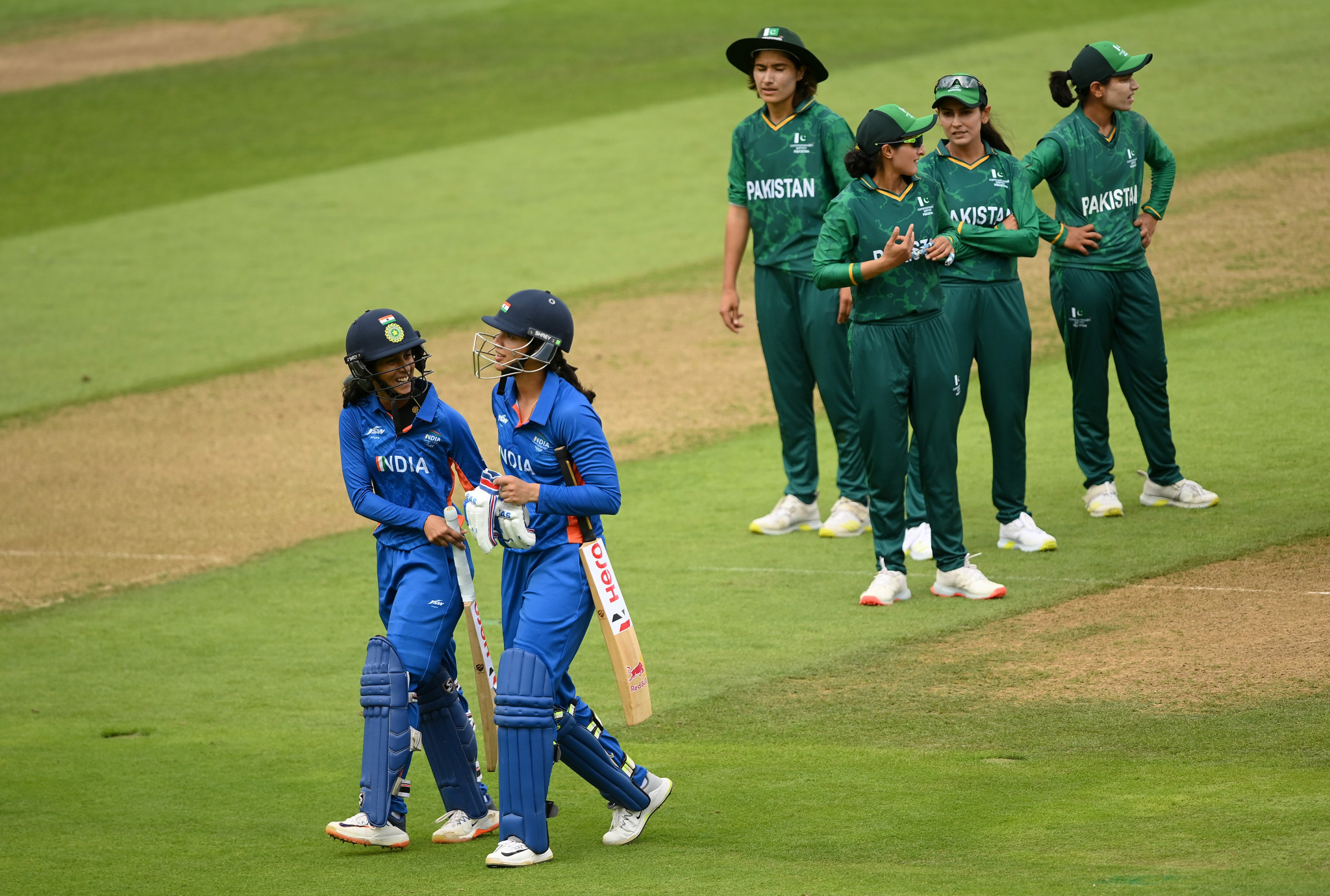 India eased to a comfortable eight-wicket win over Pakistan in their second Birmingham 2022 Commonwealth Games cricket match here, before Australia brushed aside Barbados and booked their spot in the semi-finals.

An on-and-off drizzle meant that the much-awaited India-Pakistan game was delayed by almost an hour and reduced to 18 overs per side.

Pakistan opted to bat after winning the toss and were bowled out for 99.

An unbeaten 63 from Smriti Mandhana, who starred alongside Shafali Verma with a 61-run opening partnership, helped India to their first victory of the Commonwealth Games with 38 balls remaining.

India have now won 10 of their last 12 T20 international meetings against their neighbours.

Pakistan did not have the best of starts with the bat.

Renuka Singh, who bagged four wickets in the previous game against Australia, started with a maiden over to trouble opener Muneeba Ali.

It took only three balls for Meghna Singh, who took over from Renuka Singh, to get the early breakthrough for India with Iram Javed edging one cheaply.

Skipper Bismah Maroof and Ali then steadied the ship for Pakistan with a fifty-run second-wicket partnership before Sneh Rana trapped Maroof leg before wicket.

Rana then sent Ali packing with a brilliant caught and bowled a couple of deliveries later as Pakistan were reeling at 51 for three after nine overs.

Radha Yadav joined Rana later with two wickets as the Pakistan batting order crumbled over the next nine overs to finish with 99 on the scoreboard.

"It is a special feeling," Sneh Rana said after the game.

"Whatever we had planned, it all worked out.

"It is always a special feeling to play against Pakistan.

"It is fun playing in front of a huge crowd.

"It is always a great feeling when someone is cheering for you."

In their chase, Mandhana and Verma were so dominant that it almost looked like batting practice at one point.

The duo showed no mercy with some fine boundaries to add to the joy of the Indian fans at Edgbaston with Anam Amin and Fatima Sana being the most-expensive bowlers for Pakistan.

Tuba Hassan, who stepped in at 52 for no loss, was welcomed with a four each by Mandhana and Verma before the latter edged one to the wicketkeeper in what was a much-needed moment of relief for Pakistan.

Clinical with the ball & splendid with the bat, 𝐈𝐧𝐝𝐢𝐚 𝐛𝐞𝐚𝐭 𝐏𝐚𝐤𝐢𝐬𝐭𝐚𝐧 by 8 wickets in their 2nd Commonwealth Games match. 👏 👏

While Omaima Sohail manged to get Sabbhineni Meghana out towards the end, it was nothing more than a consolation as Mandhana completed the formalities.

"In the last few years, we have got considerable amount of support from our fans wherever we play but during India versus Pakistan, the numbers are even more.

"We all enjoy it, and all the players enjoy it when we play in front of a big crowd.

"It is something that is really special, and I would like all the fans to come out in big numbers in all our matches because that is definitely going to motivate the whole team."

In the day's second match - played in glorious sunshine for the most part - Barbados were inserted to bat and started positively, but wobbled after openers Hayley Matthews and Deandra Dottin departed.

Matthews made a brisk 18, but Barbados collapsed from 37 for one to 64 all out.

Alana King was the pick of the bowlers, with four wickets, but was cruelly denied becoming the first woman to take a Commonwealth Games hat-trick when captain Lanning dropped a routine catch.

Lanning starred with the bat in a chase Australia made look simple.

She hit the winning runs and also launched Dottin for back-to-back sixes in an over which went for 25 runs as Australia chased the target within nine overs, for the loss of only one wicket.

With two wins from two, Australia are into the final four with a match to spare.