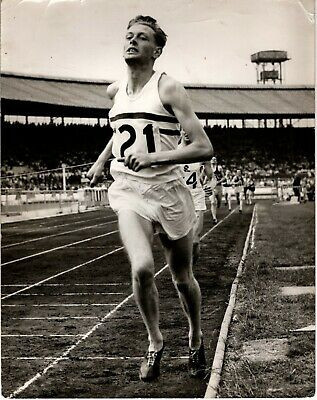 Britain's European 1500 metres gold medallist Brian Hewson has died at the age of 89, it has been announced.

Hewson, who also won two silver medals at the Commonwealth Games, is best remembered for being one of the first runners in history to break four minutes for the mile.

As he placed third to Hungary’s László Tábori and fellow Briton Chris Chataway, he became the first to run a mile in less than four minutes and not finish in the top two of the race.

Before that race, only Roger Bannister and John Landy had run a four-minute mile.

At the 1956 Olympic Games in Melbourne, Hewson was leading in the final straight of the 1500m, only to be then passed by four men.

Hewson's best season was in 1958 when he won the 1500m at the European Championships and a silver medal in the 880 yards at the Commonwealth Games in Cardiff.

He had also finished second over 880y at the 1954 Commonwealth Games in Vancouver.

But hopes of challenging for an Olympic medal at Rome 1960 was dashed when Hewson suffered a calf injury six weeks before the Games opened in the Italian capital, and he failed to reach the final of the 1500m.

Aged 16, he trained in tailoring at the Regent Street Polytechnic in London.

Hewson retired from athletics after the 1960 Olympics and continued working at Simpson's of Piccadilly in London, as a tailor, before setting up his own tailoring company.

Clothing, sport, fashion and retailing shaped his working career, and he became a women's fashion buyer and subsequently sportswear and sporting goods buyer for Debenhams.

He then joined the Incentive Group where he was involved in the design and manufacture of corporate uniforms for major UK multi-national companies.

Hewson was married to Marion, father to James, Caroline and Charles, stepfather to Tim, Sally, Robert and Penny and a much-loved grandfather.