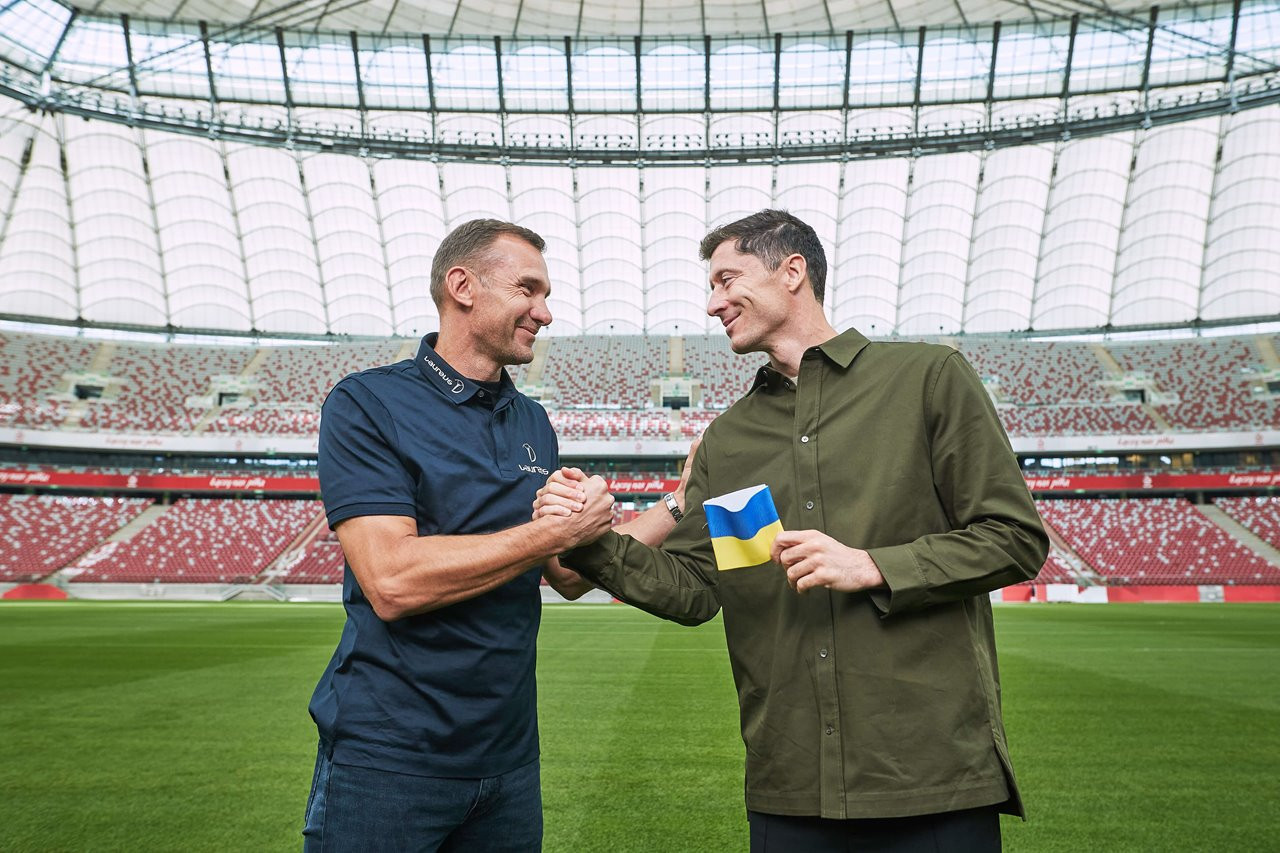 Poland's men's national football team captain Robert Lewandowski has promised Ukrainian legend Andriy Shevchenko that he will "carry the colours" of the war-torn nation to the Qatar 2022 FIFA World Cup.

More than 6.2 million people have crossed Ukraine's western border into Poland since the beginning of Russia's full-scale invasion on February 24, and the country has received praise for its acceptance of more than 1.3 million refugees.

Lewandowski, who boasts a record number of caps and goals for his country's men's national team, featured prominently in Poland's refusal to play a FIFA World Cup qualifying playoff against Russia following the launch of what Moscow describes as a "special military operation", and their semi-final opponents were subsequently expelled from the tournament.

Poland went on to beat Sweden to reach the World Cup in Qatar, and are due to play Mexico in their first match on November 22.

Shevchenko handed a captain's armband in the blue and yellow colours of Ukraine's flag to Lewandowski when the pair met at Warsaw's Stadion Narodowy, and the Polish star has vowed to show his support for the country at the World Cup.

"I will carry the colours of Ukraine to the World Cup," he said.

"As a player and a man, I support peace and I believe such symbolic gestures matter."

He added: "I believe that as athletes we should use the power of sport for good.

"I’m going to take Andriy’s armband with me to the World Cup in November as a reminder that Ukrainian people are not alone and are not forgotten.

"It means a lot to me to stand here with Andriy, a footballer and a man who has used his voice and platform to influence positive change."

Shevchenko expressed his gratitude to Lewandowski for his solidarity.

"Since the war began, I have once again been able to represent my country and I have seen athletes all over the world use their platform to support the victims of the invasion of Ukraine," he said.

"I want to thank Robert Lewandowski for this act of solidarity and for all of his work on behalf of my country - and I also thank the entire sporting world for their response to this crisis.

"What I have seen is proof that sport has the power to change the world.

"There is a special relationship between Ukraine and Poland."

The 2004 Ballon d'Or winner Shevchenko is Ukraine's record goalscorer in men's international football with 48 to his name.

He also managed the national team from 2016 until the conclusion of last year's delayed UEFA European Championship, where the country enjoyed their best performance to date by reaching the quarter-finals.

Russian and Belarusian athletes and officials have largely been frozen out of sport since the International Olympic Committee (IOC) recommended their non-participation at international events on February 28 due to the invasion of Ukraine.

There have been recent suggestions that a "pathway" for their return is being discussed, but the IOC has said its recommendations - branded as protective measures - "remain in place for the time being".