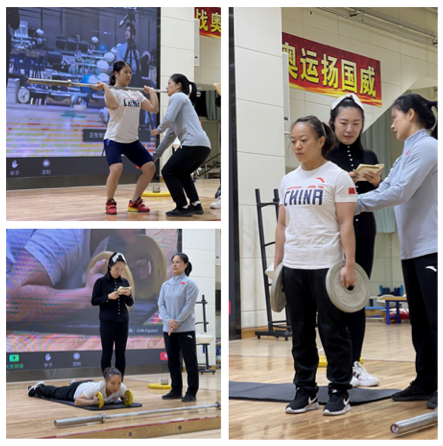 China’s record-breaking weightlifters, and the team behind them, have shown fellow athletes and coaches around the world some of the secrets of their success in landmark virtual training camps.

China is by far the most successful nation in weightlifting, and has been throughout the 21st century as the power base has moved from Europe to Asia.

More than 130 athletes, officials and coaches from Europe and the Americas watched the sessions - more of which are planned - and were able to ask questions and see demonstrations by Olympic gold medallists, their coaches and support teams.

There was a video that focused on China’s sports science team and some of the strange-looking machines they used in helping their weightlifters to cope with the one-year delay to the Tokyo 2020 Olympic Games.

That delay, a result of the COVID-19 pandemic, caused severe disruption to training schedules all over the world but China’s "scientific philosophy and training methods" paid off again in Tokyo.

China won an all-time best of seven gold medals at the Tokyo Olympic Games, where Lu Xiaojun also became the sport’s oldest Olympic champion ever, at 37.

A few weeks after the Olympic Games came the Chinese National Games, a mini-Olympics in which the weightlifters often surpass world records.

Because of the demands of those two events China will not be sending its strongest team to the International Weightlifting Federation (IWF) World Championships in Tashkent, the Uzbekistan capital, next month, but such is their strength in depth all eight selected will be strong contenders for gold.

The initiative for the virtual camps came from Zhou Jinqiang, President of the Chinese Weightlifting Association (CWA) and a candidate for the IWF Presidency, when the pandemic disrupted plans to invite national teams from around the world to China.

"In recent years, I have been pondering, while China's weightlifting team has achieved excellent results, over how to promote the development and training level of weightlifting in various countries and regions," Zhou told insidethegames.

"After being elected as President of the Chinese Weightlifting Association [in 2017], I have always been thinking to invite more athletes from different countries and regions to come to China for training camps.

"We have several national weightlifting training centres in different cities and we were ready to welcome athletes from all over the world - but there unfortunately emerged the COVID-19 epidemic.

"After the Tokyo Olympic Games, we were seeking ways for the communication of global athletes and came up with the novel virtual training camp.

"This is not the traditional theory-based webinar, but a pilot exercise-based training camp, giving full play to Chinese coaches' strengths together with the demonstration of Chinese national team athletes and the repetition of foreign athletes, with our coaches' comments and instructions to help improve the training level of foreign athletes."

The PAWF members were asked in advance about their training problems, and Chinese coaches then designed specific training exercises.

"Our coaches and athletes are very willing to share their successful training experience and methods," said Zhou.

"It is proved that continuous exchanges like this are needed for international weightlifting promotion and development."

José Quinones, President of the PAWF, said, "I believe that these types of projects are very beneficial for the development and improvement of our sport.

"There is no doubt that China is today the benchmark in weightlifting and that has been achieved based on serious work that incorporates the best methodology and technology.

"Our countries can learn from the best and then implement this knowledge according to the conditions of each country.

"In addition, the format of the virtual camp is quite interactive, which stimulates the coaches and athletes of our continent and is a fundamental part of the cooperation program with the CWA."

In Europe, the EWF general secretary Milan Mihajlovic said the online training camps were "very useful" and China’s invitation would provide not just new insights into training but "a legacy for young athletes to share friendships, knowledge and the Olympic spirit".

The EWF is planning to conduct virtual training camps among its own members and with other continental federations, he said.

Zhou hopes that these two virtual events are just the first step.

He aims to invite member federations from around the world to China to train in-person with the Chinese national team, and to have a try with the rehabilitation equipment in Beijing.

China’s team for the IWF World Championships, which run from December 7-17, is Huang Minhao at 67 kilograms, Yuan Chengfei at 73kg, Li Dayin, the snatch world record-holder, at 81kg and Tian Fuxuan at 96kg in the men’s events.

The women, all of whom have won junior or senior world titles, are Jiang Huihua at 49kg, Luo Xiaomin at 59kg, Huang Ting at 64kg and Ao Hui at 87kg.