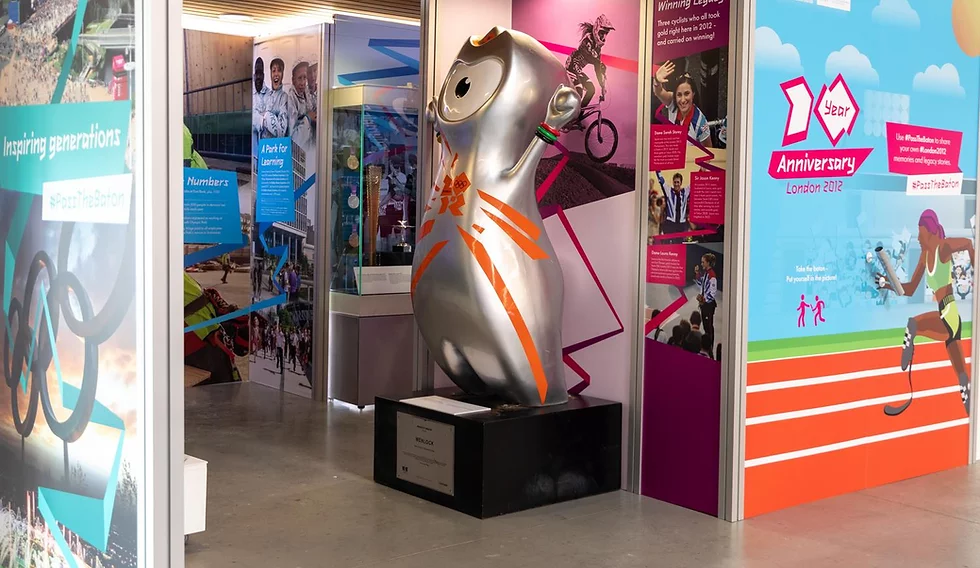 An exhibition aiming to highlight the legacy of the London 2012 Olympic and Paralympic Games has been opened at the Lee Valley VeloPark.

The free exhibition will be open until September, with organisers seeking to highlight achievements of the Games and the subsequent decade.

Sporting, economic and wellbeing opportunities are claimed to be highlighted by the exhibition, as well as the journey of the Paralympic Movement and changes to the Queen Elizabeth Olympic Park.

The exhibition has been organised by Lee Valley Regional Park Authority, the London Legacy Development Corporation and the National Paralympic Heritage Trust.

The Lee Valley VeloPark will become the first venue to host Olympics, Paralympics, World Championships and Commonwealth Games competitions in the same sport, when it stages track cycling events at Birmingham 2022.

"It is only now, 10 years on, that we can see the true scale of the incredible sporting legacy from London 2012," said Shaun Dawson, Lee Valley Regional Park Authority chief executive.

"We are proud that Lee Valley Regional Park Authority’s three venues are at the heart of this.

"The Games inspired countless people of all ages to try new things, and as Lee Valley VeloPark gets ready to host the Commonwealth Games' track cycling events, we know that these ground-breaking venues have created real health, wellbeing and sporting opportunities for communities far and wide, and will continue to do so."

Organisers have said visitors can take a selfie with the London 2012 mascot Wenlock at the exhibition, as well as relive Team GB and ParalympicsGB’s success at the Olympic and Paralympics.

Medals, the Olympic and Paralympic torches and part of the Olympic cauldron are also featured at the exhibition.

One of the jackets worn at the Paralympics Opening Ceremony, decorated with printed text from the Universal Declaration of Human Rights, and conceptual models for the opening of the Paralympic Games are also included.

It’s been 10 years since #London2012! Join us to see the transformation of @noordinarypark as we mark the achievements of @TeamGB and @ParalympicsGB with a new, free exhibition overlooking our iconic 2012 velodrome track. Open every day ? #PassTheBaton https://t.co/AN0KTUSO1m pic.twitter.com/KsIsWZ8CvL

The growth of the Paralympic Movement, from when sports were first introduced into rehabilitation programmes by Professor Sir Ludwig Guttmann at Stoke Mandeville Hospital in the 1940s, to the present day are also highlighted.

The exhibition will also mark seven years since the creation of the National Paralympic Heritage Trust.

"It is exciting to be in the park this year celebrating the British Paralympic Movement 10 years on," said Vicky Hope-Walker, project manager at the National Paralympic Heritage Trust.

"We were of course born out of the London 2012 Games and the recognition of the need to care for the early collections of national and international significance.

"As we come near to the end of a six-year project supported substantially by the National Lottery Heritage Fund it is a fitting celebration of our own achievements as well as an opportunity to plan our next five years and what permanent legacy might develop from this event."

The Queen Elizabeth Olympic Park is claimed to attract over six million visitors annually, with the area consisting of businesses, schools and 2,800 homes.

Development of the East Bank is expected to bring cultural venues to the areas, including the BBC, V&A East and a second venue for dance company Sadler's Wells.

"This exhibition takes you on a journey from that wonderful summer of sport in 2012 through to the fantastic achievements since then," said Lyn Garner, chief executive of the London Legacy Development Corporation.

"It is fantastic to see that people have such fond memories of 2012 but also appreciate the legacy that has been, and continues to be, created here in east London."