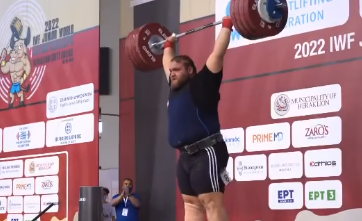 Alireza Yousefi bettered his own world record with the final lift of a successful 2022 International Weightlifting Federation (IWF) Junior World Championships in Heraklion in Crete.

The Iranian super-heavyweight went up from 215 kilograms to 239kg for his second attempt and, having appeared unhappy about something in an animated discussion with his coaches, he barely got the bar off the ground.

But the 18-year-old composed himself during the two-minute break before coming out to make the lift and beat his own clean and jerk junior world record by 1kg.

It was clear that Yousefi had the ability, as he had made a lift of 245kg at the senior IWF World Championships last December, only to lose it for a press-out.

Yousefi did not start until all his rivals had completed their lifts and finished with 177-239-416, which was 5kg lower than the total that earned him seventh place at the seniors.

Alireza Yousefi (IRI) breaks his own Junior World Record in the Men +109KG category!! Check out his 239kg C&J . We couldn’t have imagined a better last lift for the 2022 IWF Junior World Championships… Congratulations Alireza!🤩🤩🤩 pic.twitter.com/smFr0Y3cnL

Uzbekistan’s successful three days at the end of the World Championships put them joint third in the final medals table with Ukraine.

Turkey, with two golds, three silvers and a bronze, finished top, ahead of Armenia by virtue of winning one more silver.

None of those at the top of the table featured on the podium in the other event of the final day, the women’s super-heavyweights.

The top performances of the meeting by men came from those who set junior world records, Yousefi, Bohdan Hoza of Ukraine at 109kg and Rizki Juniansyah of Indonesia at 73kg.

The top three in the 73kg - newcomer Alexey Churkin from Kazakhstan was second and the improving American Ryan Grimsland third - made it the stand-out session of the week.

Neama Said of Egypt, who added the junior world title to her senior crown, and the American Olivia Reeves made the high-quality 71kg the best session in the women's events.