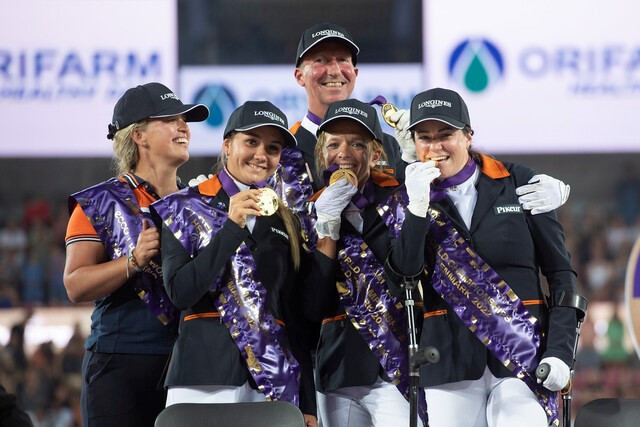 Sanne Voets in grade IV, Demi Haerkens in grade IV, Lotte Krijnsen in grade III and Frank Hosmar in grade V scored a total of 230.225 per cent to finish first and secure a spot at the Paris 2024 Paralympics.

Denmark bagged silver with a score of 229.751 per cent and Tokyo 2020 bronze medallist the United States finished third with 225.355 per cent.

Denmark and USA are also on their way to the Paralympics in Paris.

"We thought when we came here maybe a medal would be nice but every day with the training it got better and better and we thought maybe there’s a little bit more," Hosmar said after the win.

"We didn’t expect gold when we left Holland but when we were here we were thinking it was possible."

The awesome foursome danced their way to the top over two days of action.

The Dutch and the hosts were in a strong position after the first day with Voets, Haerkens and Denmark’s Katrine Kristensen starring in their respective grades.

Tobias Thorning Joergensen, riding Jolene Hill, started the proceedings today in grade three for the hosts and scored a brilliant 79.265 per cent.

Rebecca Hart riding El Corona Texel did her country proud by scoring a respectable 74.706 per cent and followed by Britain’s Natasha Baker, on Keystone Dawn Chorus, notching 73.676 per cent.

Belgium secured the grade V gold thanks to Michele George and Best of 8 scoring 78.405 per cent.