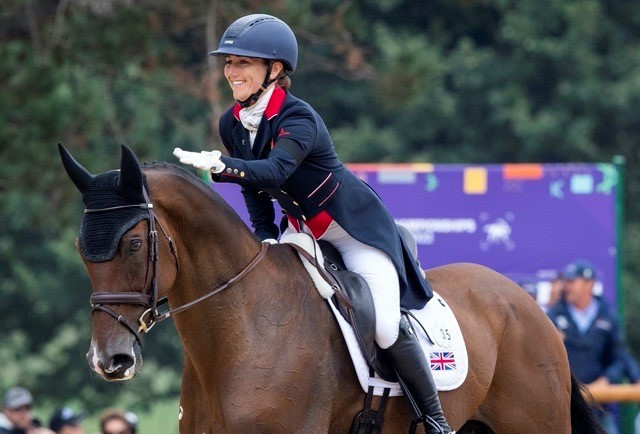 Britain's equestrian stars established themselves as the frontrunners for the team dressage event after a successful opening at the International Equestrian Federation (FEI) World Eventing Championships in Pratoni del Vivaro in Italy.

Tokyo 2020 team eventing champion Laura Collet and her trusted horse London 52 posted the best score of the day, 19.3, to give Britain a firm grip of the proceedings at the Centro Equestre Ranieri di Campello.

Her dressage score was the best recorded mark in 20 years.

Teammate and reigning world individual champion Rosalind Canter landed a tally to 26.2 with Lordships Graffalo to sit fourth in the table.

The combined effort of Collett and Canter mean Britain sit on 45.5 after day one with Olympic gold medallists Oliver Townend and Tom McEwen still yet to put on a show.

"He is just a pleasure to ride," Collett said.

"He got better and better in the test.

"I am well aware that I am sat on one of the very best horses in the world.

What a day for @CollettEventing, London & their phenomenal team! Bursting with pride and pure love, this is horsemanship at its absolute finest. ?

"People expect you to deliver, and he delivered.

"He has been on amazing form for the last two years.

"Fingers crossed, he stays that way."

Yasmin Ingham, who is competing only as an individual for Britain, fired herself to second in the rankings thanks to a 22.0 performance with Ground Jury.

New Zealand are currently Britain's closest challengers in both events after rides from Monica Spencer and Clarke Johnston.

Spencer recorded 25.6 aboard Artist to rank third while Johnstone tallied 27.4 with Menlo Park to finish eighth in the individual event.

Their combined total of 53.0 is a distance of 7.5 off Britain's but only 0.5 off the United States in third.

Williams Coleman, aboard Off The Record, and Lauren Nicholson, riding Vermiculus, scored 26.4 and 27.1 to end the day fifth and seventh in the individual event respectively.