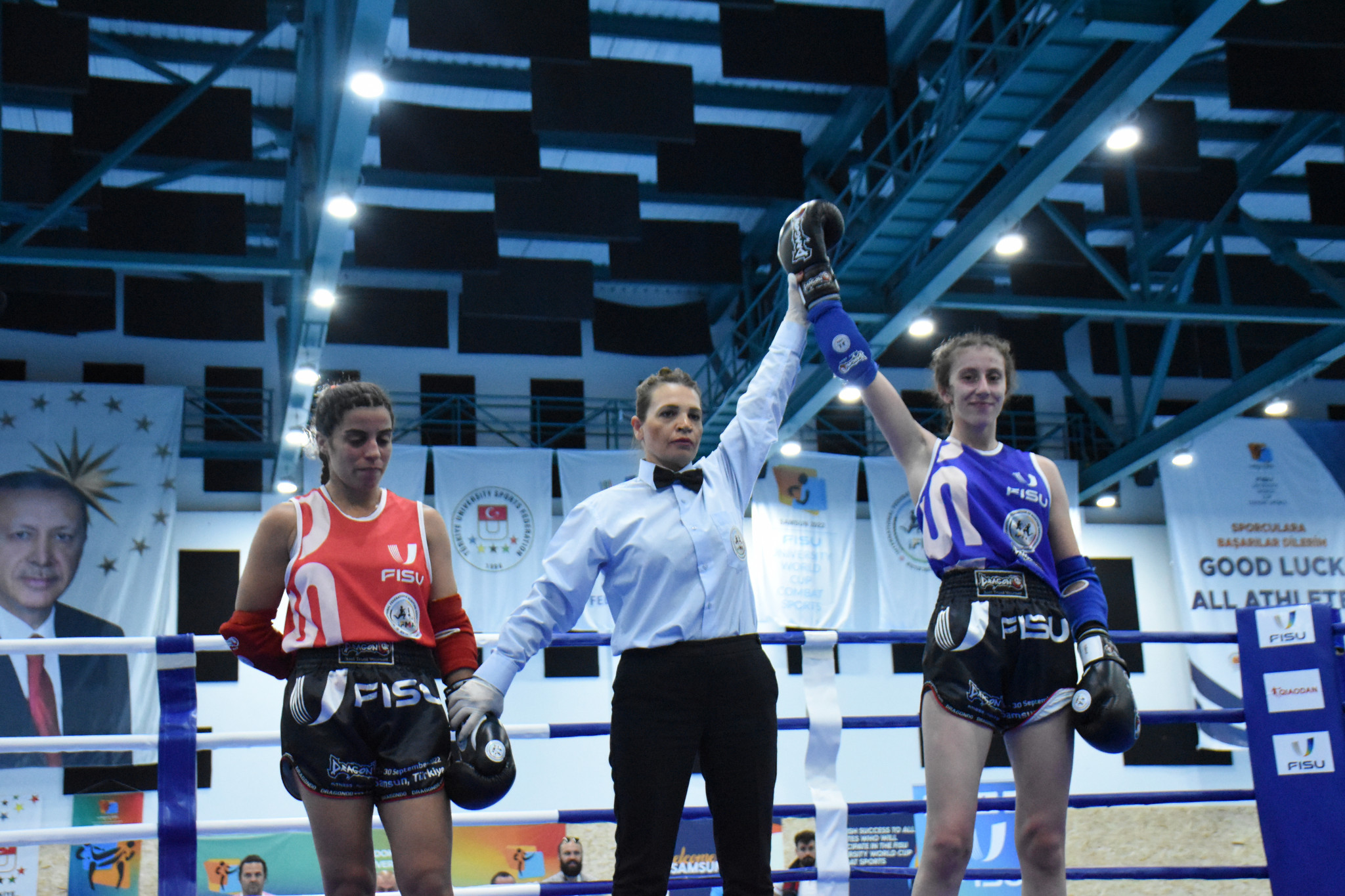 On a full day of finals, Turkey claimed the most gold medals in muaythai at the International University Sports Federation (FISU) World Cup Combat Sports.

In fact, Turkey won gold in all four women's finals they competed in, with the third going the way of Nefise Atalay in the women's under-57kg against Lenka Škundová from Slovakia.

The last of these went the way of Devrim Aydin in the women's under-63.5kg final, having unanimously defeated Miryam Chalghomi of the United Arab Emirates.

The only women's gold not to go Turkey's way today was in the over-67kg, when Tetiana Hamarko of Ukraine defeated Dana Akef Batanji of Palestine.

Other Turkish wins came in men's categories, including in the under-63.5kg final which saw Tunahan Atar have his arm raised at the expense of Ameer Amle from Palestine, while Kubilay Tarhan won an all-Turkish men's under-67kg final against Ismail Baran Özdemir.

An all-Turkish final concluded the action here, with Umut Eryimaz beating Muammer Can Sahin in the men's over-91kg by an early referee's stoppage.

It could have been an eighth gold, however, Palestine's Ahmad Helal came from behind to defeat Hasan Cetin in the men's under-86kg final.

Ukraine also took other victories in the later part of the day - with Vladyslav Yeremenko beating Italian Alein Iannone in the men's under-71kg final, before Oleksandr Yefimenko won the under-75kg title against compatriot Vladyslav Hryhoriev.

In wrestling, Turkey and Mongolia claimed five out of six of the women's titles.

Two of the hosts' golds came in head-to-head encounters, with Emine Cakmak defeating Sila Aykul 4-3 in the women's under-53kg, followed by Kadriye Aksoy defeating Merve Karadeniz 5-0 in the under-65kg.

The other was won by Nesrin Bas in the under-68kg round-robin tournament with victories over Alina Rudnytska of Ukraine and Merve Pul from Turkey.

Mariia Orlevych from Ukraine took the under-76kg gold, by virtue of technical points obtained after all three competitors drew with each other.

Mehtap Gultekin and Aysegul Ozbege from Turkey were the bronze medallists.

With four wins from four, Mongolia's Enkhzul Batbaatar claimed gold in the under-50kg, joined on the podium by France's Emma Luttenauer and Zehra Demirhan of Turkey.

Finally, Dulguun Munkhbold took the other Mongolian gold in the under-57kg final by beating Elvira Kamaloglu of Turkey 11-4.