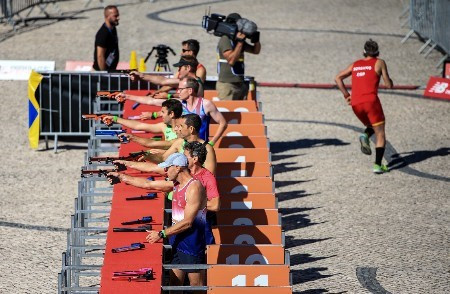 The world number 27 initially won the senior men's title after timing at 10min 25.10sec to hold off two challenging Lithuanians.

Titas Puronas was the closest to edging the Pole but came up short by 12.20sec, while compatriot Paulius Vagnorius recorded a time of 10:41.00 to take bronze.

Gutkowsi followed up his triumph with another in the mixed relay, where he partnered compatriot Wiktoria Wierzba.

Gutkowski revealed at the competition that his next big target is to qualify for the Olympics.

"I ended my season one week ago after the European Championships, and I didn't know where to go for the holidays but then I saw that Lisbon was hosting the Laser Run World Championships and I thought 'OK, let's go, let’s do this for fun', and now I'm the gold medallist so it's nice.

"Next year the most important competition will be the European Championships because it's the main qualifier for Paris 2024.

In the senior women's competition, Pinelopi Nika of Greece was on unbeatable form as she crossed the finish in 11:44.80.

Czech athlete Aranka Chalupnikova was next in the line after clocking 11:47.90, while Wierzba recorded 11:49.40 to secure bronze.

Britain and Portugal had the most success across every age group with the nations picking up 15 and 11 golds and a total of 34 and 46 overall medals respectively.

Egypt concluded the event third on the medals table thanks to 10 medals, six of which were golds.